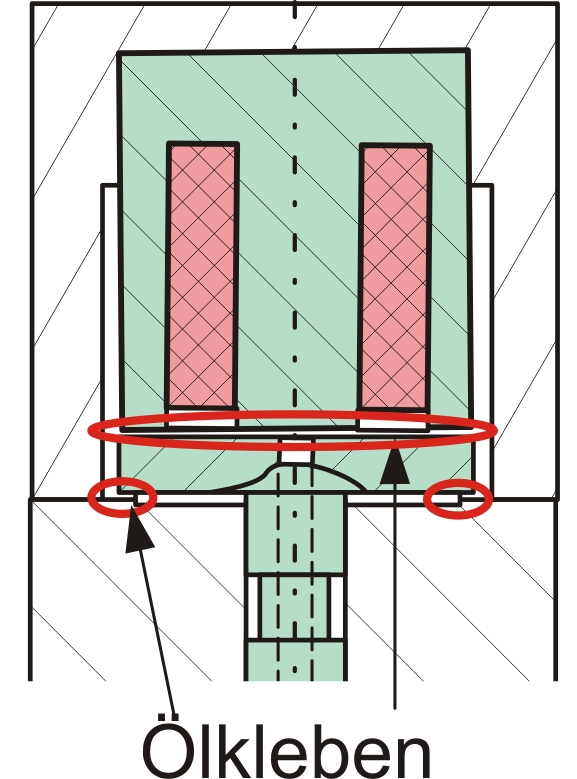 Fast dividing of close surfaces with some fluid in between lead to high forces. This phenomenon is called fluid stiction. In case of fast switching valves with flat armature design, this effect becomes dominant during the switching process and reduces the switching time significantly. For a deeper understanding of this phenomenon detailed mathematical models has been derived to be finally used in an optimization processes. Resent developments based on this theoretical background led to a novel design of the fluid stiction exposed parts of such a switching valve which allows a complete avoidance of this effect. After successful experiments a patent has been applied.

The apparently adherence oft two surfaces forming a fluid filled small gap plays a significant role in different technical branches. In case of oil it is called oil stiction. Among others it causes severe problems in the development of switching valves where under certain unfavorable conditions a complete malfunction of the valve is possible. At LCM, the holding company of ACCM, the worldwide fastest valves are developed. The so called flat armature design fits best for such fast valves. Especially this flat armature with the solenoid forms small gaps where oil stiction occurs. Additionally on both end positions small surfaces are added to achieve a high damping of the fast armature in its desired end position. This leads to a higher durability of the valve. But when the armature anew has to be accelerated in the opposite direction high stiction forces has to be overcome. In the doctoral theses of Markus Resch this phenomenon has been studied. The relevant effects and the role of the main parameter had been clarified completely. Mathematical models describing this effects during the fast opening of two surfaces which consists of four different phases are used now in the development process for fast valves.

Recently, a solution to overcome this thread off problem of desired high damping forces at low oil stiction effects has been achieved. Via a completely different design of the contact areas high damping is possible but oil stiction can be avoided completely. This concept has already been experimentally proven. In a durability test after 450 Million cycles no relevant wear of the contact areas can be found.